Last weekend our conference train got rolling again. A group of twelve synyx guys and gals boarded the ICE to our capital, heading for the Berlin Expert Days, a nice and small two-day developer conference. The anticipation was high as the topics and speakers were promising and we were looking forward to having a nice time inside and outside of the conference.

The following talks were my (highly subjective) Top 3 of the conference:

Eberhard Wolff started his talk with the provoking thesis that Java app servers are dead and that there is no point in using them any longer. At first I thought this was strongly exeggarated and probably not true but then he backed his statement with a surprisingly high number of really good arguments. He made me hate application servers :-(.

His key points among others were:

In the end Wolff did not yet provide an elaborated alternative but hinted that an architecture of standalone micro service applications could be a much better way to go. 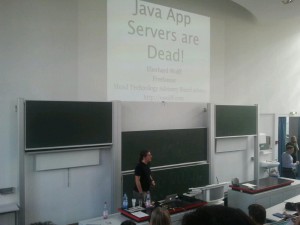 Jochen Mader’s talk about the distributed JVM platform VERT.X was highly informative and entertaining. While talking with incredible speed and a stylish outfit (wearing Star Trek t-shirt and socks) he presented his plan to conquer the world with robots. He demonstrated the prototype of his version of Skynet, consisting of a RasPi cluster and a Lego Mindstorms robot running VERT.X instances.

This effectively indicated the power of VERT.X and its many features, as you can connect services of many different JVM languages without much effort in a VERT.X cluster, that very intelligently takes care of all needed communication and resilience issues by itself. Mader pointed out the modularity, event-driven architecture, scalability and multi language capability of VERT.X clusters, convincing his audience of the power of this solution. 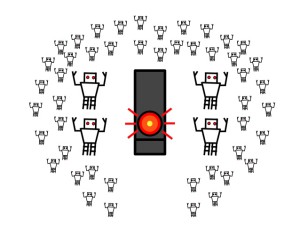 While the first two of this top three list were a clear pick for me, there were many equally good talks battling for the third rank. In the end I picked Michael Plöd’s talk, who shed light on the many aspects of caching. After explaining the demand and applications of caching in general, he enumerated a nice list of best practices and patterns everyone should follow when designing caches: 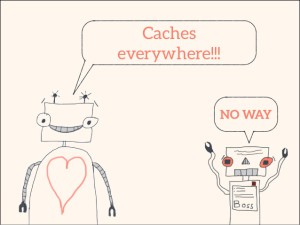 In addition to the top three there was a high density of competent speakers with interesting and informative talks. I want to point out our homeboy Florian Hopf who gave a nice overview on the state of search driven applications together with his colleague Tobias Kraft. They demonstrated that it is worthier than ever taking a look on Solr and ElasticSearch to implement your queries. Also definitely worth mentioning are Stefan Tilkov and Martin Eigenbrodt with their demonstration and evaluation of REST HTTP implementations in different JVM languages, Stefan Zörner with a useful categorization of software architecture and different ways to evaluate your architecture, and Timmo Freudl-Gierke with a insightful practical overview on micro services.

The clear winner in the category “trending buzzword” was micro service. It ran like a common thread through the whole conference. Not only Freudl-Gierke’s talk about micro services in practice took care of the topic. Over the conference we learned that it is time to inaugurate an era of standalone micro service applications of any language that talk together over REST interfaces, get clustered with VERT.X, collect their logs centrally using logstash and kibana and intelligently use their local and distributed caches thus saving failed architectures. We saw how to create them easily using Spring Boot and how to supply continuous integration for all of them using Docker.

These are the highly anticipated expectations – it lies in the nature of hyped buzzwords that fulfilling these expectations is a completely different matter. Let’s see what the future has in stock for us!

So much for the technical mumble jumble. Let’s take some time off and talk about one of the greatest benefits of the BEDCon – that it takes place in Berlin! There are not many cities where you can enjoy your evenings in the same way as in our capital. During our three days in Berlin we got yelled at by an Italian waiter for not ordering another Grappa, consumed numerous instances of “Diesel”, visited a punk rock concert, an underground live music club and a russian disco and on the walk between the different locations we enjoyed our on-the-way-beers, that we got from a “Späti”.
A tech-savvy taxi driver with a dash cam showed us a video of a police car causing an accident on his Galaxy Note 10.1 (while speeding through the city way above the speed limit) and an US-American waitress in a Cuban restaurant took turns in laughing and singing while serving delicious meals and Cocktails.

It is difficult to collect so many different experiences in such a short time anywhere else and we enjoyed every night until as late as reasonably possible. These great experiences in combination with the high quality of conference talks will ensure that next year a large amount of synyx dudes and dudettes will again board the ICE to Berlin.