Belgium, November 2011. More than three and a half thousand people are surging into Antwerp’s megaplex, the Kinepolis. It’s Devoxx-time!

From November 14th to November 18th Europe’s biggest community-organized (i. e. not organized by a big corporation) Java conference took place in its traditional venue in Antwerp and of course Synyx was there, too. Marc already wrote about why we like attending Devoxx in Reasons why I go to Devoxx.
This year was the first time I attended Devoxx. Although I’ve been going to other conferences before, Devoxx positively sticks out for a couple of reasons. 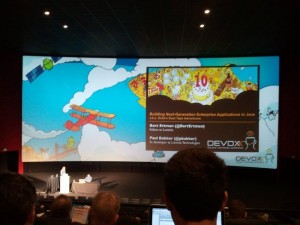 The Continuous Delivery by David Farley was really good. He recapped some things I already knew from reading the book he co-authored (see my Review of Continuous Delivery) but also told a lot about how they implemented continuous delivery at LMAX. 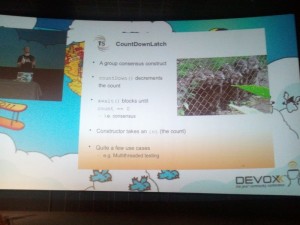 Another very informative and entertaining talk was The Well-Grounded Java Developer by Martijn Verburg and Ben Evans. While it didn’t really contain any breaking news – you probably have heard or read about the features of Java 7 around 365 times before and have heard about the concurrency package java.util.concurrent as well – it was a very well executed talk and forced the audience to pay attention to these important topics. Also the live-action play with a set of Dukes was priceless as well as the cameos of the diabolical developer and the otter metaphore for the concurrency part of the session. 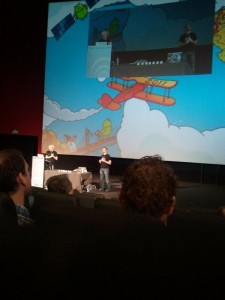 Jenkins: From Continuous Integration to Continuous Delivery in the Tools in Action track was also interesting as John Smart described and showed how to use Jenkins and a battery of plugins to implement Continuous Delivery. Since we use Jenkins internally as our CI product, I took some good ideas out of this talk.
In the evening of the second university day there was the Fireside chat with Tim Bray, Cameron Purdy, Mark Reinhold and Henrik Ståhl which is a very interesting format but started way too slow in my opinion. When the participants had warmed up after half an hour it got a lot better.

Wednesday was the first of three conference days (as opposed to university days) and started with three keynotes. First Stephan Janssen started with his welcome speech in which he celebrated the 10th anniversary of Devoxx. This was followed by Henrik Ståhl’s keynote which positively surprised me. Mr. Ståhl hadn’t impressed too much on the evening before during the fireside chat. The last keynote was held by Cameron Purdy about Java EE but it turned into a boring marketing talk after about half way through, which is sad because it started really promising. 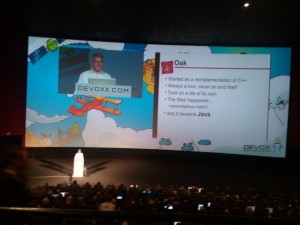 There were also awesome talks on this day, prominently Java: The Good, the Bad, and the Ugly Parts by Joshua Bloch and Language / Library co-evolution in Java SE 8 by Brian Goetz, two Java veterans with a lot of conference speaking experience. As always with high quality talks and speakers, the rooms were crowded during their performances.
Much of the charm of Devoxx are its informal BOF sessions. Particularly the Less annoying Java standards BOF with Ben Evans and Martijn Verburg was very interesting. They presented the Adopt a JSR Program and discussed how the Java community could participate on the JCP more easily.
The second conference day again started with a keynote, this time on Android by Tim Bray, and was packed with good talks. Some talks I attended were really exceptional, so I want to name them quickly. Jonas Bonér of Typesafe held a talk about Above the Clouds: Introducing Akka. Although I don’t warm towards Scala as a programming language, Akka seems to be quite a killer framework for solving concurrency-related problems. It comes with a Scala and a Java API but the Scala API looks (naturally?) more elegant.
Another very interesting talk was The Disruptor, High Performance Inter-Thread Messaging which was scheduled for Monday (during the university days) but was cancelled on short notice. Fortunately that talk was rescheduled for Thursday during the lunch break. Michael Barker gave an introduction to the Disruptor framework and walked the audience through an example utilizing it in a simple application.
And even more highlights took place on this day: Dick Wall (of Java Posse fame) talked about Courage in Software Development. This was a non-technical but very inspiring session and I recommend watching it as soon as it’s uploaded to Parleys.
Following the official conference program (in parallel to the BOF sessions) there was a screening of the recently released Tintin movie and after that the anniversary party in the nearby Noxx night club – of course with a dancing Duke. 😉
On the fifth and last day we sadly had only time for the Technical Discussion Panel and one more talk. Most of us chose The Evolution of Java: Past, Present, and Future which was again very interresting and in which Joshua Bloch retrospectively reviewed changes to the Java language over time and scored them from “horrible” to “best thing since sliced bread” (or something like that).

In summary I really enjoyed Devoxx and learned a lot during these five extraordinary days. My days were quite stuffed and I wish I had more time for seeing Antwerp but you have to set priorities. I really recommend going to Devoxx (or to the upcoming Devoxx France, if you are a French native speaker) to any serious Java (or JVM-based language) developer.
And in case you wondered about the title of this blog post: