This year in November three of my colleagues and I were visiting the best Java conference ever – Devoxx in Antwerp (blogs here: 1,2,3). Now, since more than a month of time went by its time for recall and see, what about Devoxx is still present in my mind.
The fist thing is, that the conference was very very well organized and the location was almost perfect.
The second thing, that is still in my mind is the awful “Coffee” they served. This stuff was not worth to be called coffee and for a Java conference, this seems to be just wrong, guys ;). Please make the tickets to be more expensive next year and get some good coffee-machines for the extra money you earn. The nerds will thank you.
But the most important thing I remember is the quality of talks and speakers. They helped me a lot and improved my work already. I think Synyx invested the money for Devoxx just right, because all of us enjoyed the conference and also have a whole new set of ideas and tools ready for production now.
Unfortunately, as on every conference I missed some of the great talks I was really interested in because I was busy seeing other talks in parallel. As I said, this happens on every conference. But Devoxx got kind of around that using Parleys.com, where you can watch all talks of Devoxx for around 100$ a year. Over the last days, I’ve seen just about all of the ones I could not see because they were conflicting with other talks and it is just great. It seems its the perfect thing to do in nights around Christmas if you neither have Internet around, nor a TV accessible.
Parleys is a fancy webbased application (Adobe Air) where you can browse through all of the talks and watch them as you were used to at the Devoxx’ big cinema-Screens: They offer the video of the speaker next to the slides as well as the demo-videos in a synchronous manner. You get also some nice options like enlarging one of the videos, rate them, and so on.
But the best feature is definitely the “download” feature, since this allows you to watch the talks offline at your grandmothers using the Desktop-Client. By the way, on my Linux machines I could not install this bastard using Firefox and http://parleys.com/desktop/ but i had to wget the .air file as to be found in the pages sourcecode and then run the installer manually using a pre-installed Adobe Air.
So over the last days I’ve seen some great talks from Devoxx 2010 which I could not attend at the conference and I definitely shouldn’t have missed. Also, if you were not at Devoxx this is a perfect thing to get some of the feeling and knowledge at a nice price. Parleys also helped me a lot the last weeks at work where we introduced Wicket as the frontend technology of a new application. I could hand my colleagues the 3 hour University-Talk about Wicket as an introduction which turned out to be great since they could start using it right away afterwards. 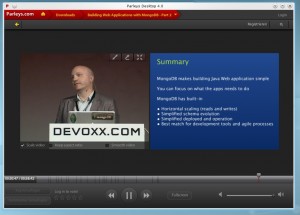 The downside of Parleys in my opinion is the way too fancy Adobe Air style of it. As this might be great for designers and “regulars”, I’d rather prefer more usability and performance while browsing and searching the videos over some nice animations and effects. The developers of Parleys should consider to include some fast and non-fancy search-able and filterable list of all talks with options like queue to download, mark as to be watched and watch. I really hope to see these features announced when we’re coming back to Devoxx 2011.