I am a fresh employee at synyx. I started early in 2013 to work for the company and the Devoxx 2013 in Antwerp was my first conference with my new colleagues. Everything started around august when a colleague asked „Whoooo want to go to the Devoxx in November. Are you in? And you?“, he was so enthusiastic that I thought: “Hm first conference with these guys? One week with them in another country? And that on my birthday? Let’s do it!”.
Till November nothing big happens. I searched through the Devoxx site for speakers and talks, but not so much. I wanted to be free and just do what I want to do on the Devoxx and be agile, of course. Then, one week before the Devoxx, I talked to my colleague to know when the train leaves, where we are going to sleep, where to get the tickets and so on. At this point I realized that synyx has everything organized and well planed. Good guy synyx!
When we arrived at the main station in Frankfurt the first cuba libre was ready to go. Of course with ice and lime. Yes we had ice. We also shared some with friends we met before. We chatted on the train about talks, speakers, the company, future projects, our new office and challenges in some of our projects. It was fun to speak about things that bother you in this different atmosphere than our office or meeting rooms. It was very relaxing and fun.
The next day was the first day on the Devoxx. We started early to get our access keys and traveled there via subway. Its a nice subway with a ‘nice’ smell, something like mushrooms.
One of the first talks I listened to was Java EE 7: What’s New in the Java EE Platform. Argun Gupta and Antonio Goncalves talked about new features of Java EE7. It was very interesting and a clear presentation with good speakers. They talked about 3 hours, so it was good that they also did a lot of jokes on the stage especially when questions arrived like “why do you do not use spring? It has every feature you represent since two years.” Good Speakers, good presentation. I learned a lot about Java EE in general.
David Gageot showed us in a quick 30 minutes live coding session called From Legacy to Cloud Under an Hour – Live Coding how easy it is to take old nasty unreadable code with about a million of if/else statements and other dirty stuff in it and a good IDEA to get a nice clean code without duplicates and all the if/else and put it on the cloud at the end. Very impressive to see that in 30 minutes. He must have trained a lot! Notice to me: Take time for your IDEA and learn what you can do with it, even if you think you know a lot.
At the second day I was excited about the talk from José Paumard called Autumn Collection: from iterable to lambdas, streams and collectors because this stuff you are using and will use all the time when programming. It gave a real clear view on lambdas, streams and what you can do with it. The syntax looked quite nice, if you take care of it. Do not start to use it for everything and make things more complicated than they already are. Let’s see how it will be in future projects with Java 8. It feels like parallel programming will be made available and easier for a wider mass of developers.
The next talk I watched was The Modern Java Web Developer. Matt Raible is a very good speaker with a lot of self irony and sarcasm. Which makes the talk even more interesting. He talked about the modern solutions of web development like 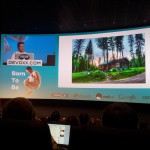 AngularJs, jQuery, CSS3, HTML5 and so on. It was a great overview over the preferred technologies for web developers. At the end of his talk the showed us a video of him coding a complete dashboard application at one afternoon. Of course with a lot of copy paste. But it was nice to see the problems he got stuck, how he fixed it and how powerful and easy to use modern web frameworks and libraries are.
When I wrote this blog entry about the third day I could not remember what talks were really good at that day, besides the talks of Martijn Verburg. The problem was not that they were bad, but maybe not so forceful. On the other hand I watched Patterns Shmatterns by Chet Haase. And maybe that makes me forget all the other talks. It was a fun quickie about patterns and their ‘pendant’. Great show, great funny face at the front. Definitely one talk to watch between other real talks to relax. The talks from Martijn Verburg: The Habits of Highly Effective Technical Teams and The Bleeding Edge were both very good. The first named talk was one of my highlights on the Devoxx, because it forced me to think about companies and how they treat their employees and how they should treat them. For example why companies do not gave their employees rights to the productive system for the project they work on and so on and so forth. A lot of questions where thrown into the room which I never really asked myself and their was one moment where I realized that synyx is making a good job. Definitely a talk employees and employer should watch and think about their process. 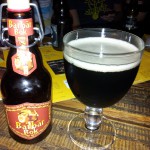 This was not only a effective day at the Devoxx. it was also my birthday. So we went for lunch this evening with everyone and then went into a student bar somewhere in Antwerp. It was really funny to go into a small student bar with round about 13 people on an evening where they had a 90’s party. Of course we knew all the great 90’s songs like Barbie Girl (O_o). But we were not prepared for it and the girls with their shards, yeah shards. Sometimes it is funny if you have a close look at it. After that ‘crazy’ party we moved on to the Beer Central to taste all their 300+ beer. Let’s say we almost did it. Great but different birthday than the years before. Thanks synyx!
At the last two days of the conference I watched a lot of talks, just one after another and running from room to room. Two of them I do remind very well, because they where my points of lights these days.

First of all another highlight of my Devoxx week was the talk from Joey Cieplinski with the title Business Strategies for Small Independent Developers he talked about premium and none premium applications for mobile devices and his view to make higher price applications. Then to concentrate on the 10% of customers that care about your product and do not see it as a throwaway piece of software to buy for less then 1€. This talk confirmed me in my opinion to create quality software and get what you earn for a good product and concentrate of the concerns of real customers and their problems. Inspiring talk, thank you for sharing it. 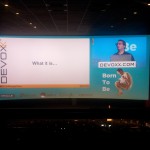 He explained how to program with the Mirror API and his hopes of getting the GDK (Glass Development Kit) soon. Google Glass seems to be a product which can change parts of our lives, but for this it needs a real case in which it will be necessary to have one. I am excited to see what will be possible in the future.
And at the end a small summary.
Antwerp: